Have you ever wanted to see in the dark? Night vision cameras and binoculars make this possible for police and military, but what about the rest of us? Well, night vision eye drops have been created and tested.
A scientist at Columbia has done research with mice on night vision drops, and, without his permission or supervision, two men decided to test his research.

These biohackers, as they refer to themselves, (one nurse and one researcher), are with the Science for the Masses. They took eye drops with chlorin e6 and injected them in their eyes in order to induce night vision. They had done some of their own research prior to this.

While doing research on Vitamin A and vision they came across the research on chlorin e6 and decided to follow up on it. They tried to get in touch with the original author and scientist but wasn’t able to. After giving up they decided to continue on their own.

A little further research revealed that the theory was actually developed by Ilyas Washington. The theory Washington developed comes from studying the vision of the dragon fish. Unlike human eyes, the eyes of a dragonfish, which is a deep sea fish, responds to red light in a dim environment. We humans respond to green light in the same dim environment. The difference is that the eyes of the dragon fish contain this chlorophyll (chlorin 6), which absorbed the red light so that one could see much better in the night. 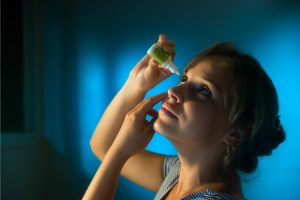 To prove this they recruited four others and put the eye drops in their own eyes. They then tested the subjects at night. One had taken the chlorin e6 appeared to have resulted in the dark that was better than those who had not taken the chlorin e6.

But this was a very limited test without enough of a sample for significant results. There was no baseline test prior to the use of the chlorin e6. Is the product safe? What would be the means of transmission? Washington injected it into the bloodstream while the study used eye drops directly into the eyes.

The top medical officer for Science for the Masses who approved the study says there is still more to do and “you have to take the next step”. The experiment they did with Gabriel Licina gave him a temporary ability to see better in the dark up to 50 meters away. At 50 meters Lancia could actually make out people standing in front of trees. Those who did not take the Ce6 could only do so about one-third of the time.

Despite these concerns, eye drops have been made from the Ac6 mixed with saline and insulin to create a chemical reaction that allows for improved night vision for at least a few hours at a time.

The question remains at this point – is this a realistic solution to night vision issues for the ordinary person? How do night vision issues affect the normal person? Should this be further developed along the lines of the Ce6 for the military? It appears, at least at this stage of the research game, there is still much to do to make this product relevant and successful.

For those who wear glasses and have night vision issues and are trying to find solutions for these patients, it would appear that this technology is not there yet. There is much more work to be done first. Most night vision issues are not caused by eye disease but rather by cataracts, macular degeneration, and incorrect prescriptions.
Ce6 would not help these at this point.

So for the moment, it would appear that these patients can be helped with better anti-reflection coatings and tints on their glasses rather than eye drops that only work for a short time if they work at all.